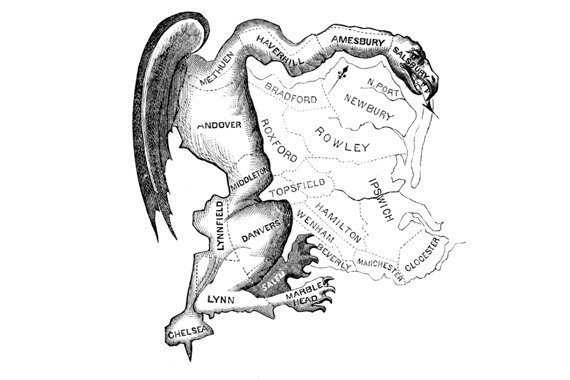 Elbridge Gerry, who died on November 23, 1814, could have been remembered for any number of contributions to American history. Unfortunately for the memory of Elbridge Gerry, he has mostly faded into obscurity, having left behind a legacy of one word—gerrymander.

The year was 1812. War with England had not yet been declared, but the whole nation was feeling the effects of the strained relationship. The economy was floundering, sailors were being seized to serve on foreign ships, and America’s national status was being slighted. Two parties struggled for control of the situation, the Federalists and the Democratic-Republicans. The former favored peace with Britain at all costs; the latter was anxious to put an end to British aggression at the risk of being derided as the party of “War Hawks.”

The stakes were clearly high, especially since 1812 was an election year. Perhaps it is little wonder that some politicians were willing to play hardball to win.

Early that year, Democratic-Republican Elbridge Gerry, in his capacity as governor of Massachusetts, signed the redistricting bill that was to propel him to infamy. State senate districts were instantly distorted, cutting across counties in an outlandish manner. An outcry arose among both citizens and newspapers.

One district in particular caught the attention of the guests at a dinner party held that March. While the gerrymander was probably discussed at more than one dinner party that year, this party was significant because one of the guests happened to be engraver Elkanah Tidale. During the evening, the conversation turned toward politics, and the guests examined a map of the new district, a twisted arc through part of Essex County. One of the men present commented that the peculiar shape just needed wings to turn it into some type of prehistoric monster. Tisdale obliged by embellishing the map, and the strange creature was promptly identified as a salamander.

On March 26, Tisdale’s salamander appeared again in the Boston Gazette, this time with a new name—Gerrymander. Gerrymander (back then pronounced with the hard g of Gerry’s name rather than the soft g of gerrymander today) was a portmanteau word, describing the shape of the offending district and effectively laying the responsibility for it at Governor Gerry’s doorstep. It became a very popular term in short order. On April 14, it made its first appearance outside of Massachusetts in the Concord Gazette of New Hampshire. On May 19, it showed up outside of New England in the New York Gazette & General Advertiser. By 1813, its meaning had expanded beyond redistricting shenanigans; according to the Boston Gazette, “When a man has been swindled out of his rights by a villain, he says he has been gerrymandered.”

Although Gerry’s gerrymander kept the state senate for the Democratic-Republicans as intended, the resulting outrage cost the party the state house and the governorship.

Although many nations have tampered with boundaries throughout history, the United States is the first nation known to have suffered from widespread gerrymandering. It began back in colonial times, with the drawing and frequent redrawing of county lines. It was known as early as 1732 in North Carolina, where the governor was in the habit of creating and modifying precincts as necessary to pass or block legislation.

It is frequently asserted that Antifederalist leader Patrick Henry perpetrated the first gerrymander in the United States under the Constitution, drawing an Antifederalist district in Virginia in 1788 to keep Federalist James Madison from winning a seat in the United States House of Representatives. Historical writings show that people were divided on their opinion of the event. The redistricting bill was drawn up by a committee of seven Federalists and eight Antifederalists, Henry not being a member of the committee. While Virginians anxiously awaited news of the outcome, fear ran rampant. George Washington wrote that many expected that the Antifederalists would gerrymander themselves into additional offices. On the other hand, Theodorick Bland, a member of the Virginia House, eyed the Federalist side with suspicion, writing that the bill was “entirely of their carving.”

After the election was over, Madison claimed in a letter to Thomas Jefferson that Patrick Henry had associated Federalist-leaning Orange County with several Antifederalist counties and had not included Federalist Fauquier County. It is true that Madison’s 5th Congressional District was composed of five counties with Antifederalist tendencies to two of Federalist sentiment and one divided. Nevertheless, the district received an equitable proportion of the population. As for compactness, the modern measure of gerrymandering, Madison’s district would have scored well. As no counties were divided, irregularities in the borders coincided with those in county lines. On the other hand, if Fauquier County had been included, its sizable population would have made drawing other districts equitably very difficult.

A Federalist writer known as “Decius” shed light on the possible source of the complaints in the Virginia Independent Chronicle. Early in 1789, he wrote a long series of articles denouncing Patrick Henry for gerrymandering. During the series, a reader requested a “geographical description of the districts in which Mr. Madison is chosen, marking out the limits of each county, and the artificial or natural boundaries of the whole—and also Mr. Madison’s place of residence; this will prove to the world the partiality of the late assembly…. [F]rom your account in your ninth number, I suppose it must be districted into a thousand eccentric angles.”

“In respect to the district I am called on to give a geographical description of, I believe it cannot be shown where I have objected to its present shape. I confess I am entirely satisfied with its limits and boundary as things have turned out. But as it was attempted to be formed (which is all I ever objected to) it would not only have described eccentric angles but most effectually deprived the people of that particular part of the state of their choice of a representative in Congress.”

Decius then revealed that during the course of debate, a suggestion had been made to add Cumberland County to Madison’s 5th District, which would indeed have added a sharp angle and long, narrow projection to the overall shape. However, this county was not added to the district in the final bill, and Madison beat James Monroe for the seat 1,308 to 972, a 336-vote lead.

So what was the first gerrymander in the young United States of America? As it turns out, it was the creation of Virginia’s districts for choosing the Electoral College in 1788. These were based on the state senate districts, first created in 1776 and drawn to favor the aristocratic eastern part of the state. The state senate districts were paired to form larger districts for choosing electors. Virginians generally agreed that the system was very unequal, but it was viewed as the best plan that could be hit upon before the election was to be held. As matters turned out, this particular gerrymander probably influenced the presidential election very little, since George Washington was the unanimous choice of all electors, and the voting for the vice president was carefully engineered to allow for the election of John Adams without accidentally placing him in a tie for the presidency (the vice president was simply the runner-up in the presidential campaign then, each elector being called on to vote for two different candidates).

Gerrymandering quickly became an accepted part of American politics and a powerful tool in the struggles between the Federalists and the Antifederalists, later the foundation of the Democratic-Republican Party. When one party held the reins, it freely used gerrymandering to influence the results of specific elections. There were lulls when party rivalry and therefore gerrymandering diminished, as when the Federalist Party dwindled to extinction after the War of 1812, but these respites were generally brief. By at least 1840, gerrymandering was a standard practice in every state divided into districts.

Many attempts have been made to reform redistricting over the years. States amended their constitutions, and in 1842 a national law was passed to limit district size and ensure that each district was formed from contiguous territory. All this was in vain, as evidenced by the fact that gerrymandering first appeared in a dictionary in 1848 and then an encyclopedia in 1868. Even new states were gerrymandered; for instance, Dakota Territory was admitted to the Union in 1889 as two separate states, both friendly to Republicans.

Ironically, an attempt at reform in 1965 sometimes led to further gerrymandering. This was the Voting Rights Act of 1965, which prohibited the use of gerrymandering to disenfranchise minorities, among other election reforms. While statistics show that minorities were encouraged to vote after the passage of the act, it did pave the way for the opposite extreme—the “majority-minority district.” Some oddly shaped districts were drawn to favor minority groups, ostensibly to avoid even the appearance of impropriety and as compensation for unfortunate incidents in history. In the 1990s, however, the Supreme Court ruled that any gerrymandering based solely on race must be held to strict scrutiny.

Individual states continue to battle gerrymandering. Several have turned to redistricting commissions with mixed success, while in 2010 Florida approved two ballot measures that demanded compact districts based on natural boundaries as far as possible, each district having an equitable share of the population.

Inside the Gerrymandering Process

The United States Constitution requires a census every 10 years. Nearly every census, states gain and lose seats in the House of Representatives, making redistricting necessary. Most states take advantage of the opportunity to redraw their own legislative districts at the same time. The process of drawing up state legislative districts is far more important than voters might suppose, as it sets the political stage for the next 10 or more years. If the party plans well and retains its majority in the state legislature until the next census, it is in a good position to control the redistricting process and therefore national elections the next time around.

Of course, there is always the possibility that the state legislature may be of one party, and the governor may be of the opposing party. Unless the legislature is in a position to override the governor’s veto, it must be prepared to compromise a bit (note that not all states allow the governor to veto a redistricting bill).

In this age of computers, gerrymandering can be done with extreme precision. Political parties have access to tremendous databases containing information on every individual voter and household. They know what party any given voter belongs to, how many times he has voted in the past, and how much money he has donated to various campaigns. Combine this with race, age, education, and income statistics, and the party can identify with tolerable accuracy where likely supporters and opponents are to be found.

Based on the information at hand, four forms of gerrymandering can be used separately or in combination to achieve a desired result:

Of course, densely populated states with the need for more districts tend to suffer the most from gerrymandering.

Gerrymander Exercise
Draw your own district!

Redistricting and Gerrymandering
Lesson plan at C-Span.org for older students.