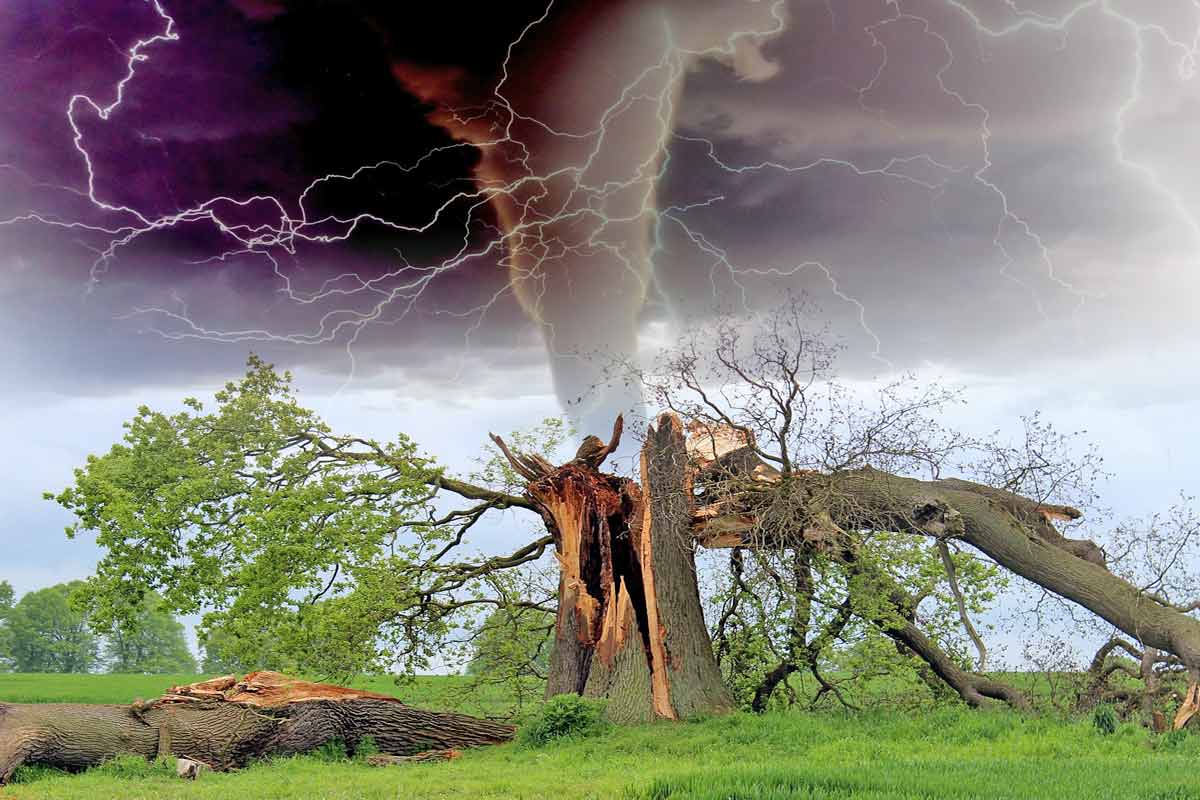 On the evening of May 25, 1955, an F5 tornado touched the ground near the Kansas-Oklahoma state line. As it proceeded northward, it took a northeast twist that put it on a direct collision course with the small Kansas town of Udall.

Udall had been under a tornado watch that evening, but as residents watched the 10 o’clock news they were informed that the danger was past. They did not know that a bureaucratic problem delayed the announcement of a tornado warning until 10:08 PM—after they had switched off their television sets and started to prepare for bed.

A roar of wind roused the town minutes later, but it was already too late. People fled from their houses to take refuge in underground storm shelters only to find themselves in the path of the tornado. The violent funnel plowed through town, killing 80 people and injuring over 200, half of the town’s population. The Udall tornado set a record for the deadliest tornado in Kansas, and the 25th deadliest in the United States.

Little wonder that the tornado was long the most feared of weather phenomena. Even to this day, there are many details about tornadoes and their causes that scientists do not understand.

Tornadoes are not unique to the United States. They occur regularly in Great Britain, Bangladesh, parts of southern Russia, the border between Argentina and Brazil, northeastern Mexico, and the Canadian Prairie Provinces. America does seem to have the distinction of producing the most tornadoes, however. A tornado can occur in any state, but Tornado Alley in the center of the country is notorious for tornado activity.

How a Tornado Forms

Most tornadoes are associated with supercells, powerful rotating thunderstorms. Not all supercells produce tornadoes—many are characterized by frequent lightning, damaging winds, large hail, and flash floods. To spawn a tornado, a supercell must have both instability and large-scale rotation to work with.

Before a tornado can form, there must be a strong vertical wind shear within the storm, producing a rotating cylinder of air. When the conditions are right for tornado creation, this cylinder rotates at increasing speeds and stretches out. At the moment that one end of the cylinder touches the ground, it becomes a tornado.

The behavior of a tornado tends to be extremely irregular. It may bulldoze across the countryside for hours, or it may promptly withdraw into the clouds without causing the slightest damage. It can climb mountains, descend into valleys, or persist in a straightforward course across level terrain. It may whip an unstable structure into shrapnel while leaving a sturdier building next door almost unscathed. It can drive splinters through iron and sweep checks and letters into other states.

After a tornado has passed, the damage it has left behind can be used to form a subjective estimate of its strength. The F-scale, invented by Dr. T. Theodore Fujita in the early 1970s and improved in 2007, is used in this process. F0 is the low end of the scale, with little damage and gusts of 65 to 85 mph. F5, characterized by total destruction and gusts over 200 mph, is the high end.

Fortunately, there are safety precautions that you can take when severe weather hits:

Remembering The Udall, Kan., Tornado of 1955
Background from NOAA.

Pictures from the Udall Tornado
From NOAA.

Twister Dashboard
Statistics and locations of tornadoes from Smithsonian Magazine.

How Tornadoes Form
Simple explanation at National Geographic for Kids.

Types of Tornadoes
The difference between supercell and non-supercell tornadoes from NOAA.

Tornadoes
What to do to stay safe from the Department of Homeland Security.

How Do Tornadoes Form
TED-Ed video. (You may want to install an ad blocker before viewing.)

Tornado in a Jar
Experiment to observe how tornadoes form.

Vortex
Same idea as above but more complicated from the Exploratorium.

Tornado Maker
Or purchase a cyclone creator if you are not the crafty type.

Write the Conclusion: When a Tornado is Coming
Simple printable from K12Reader.com where students read basic facts and write a conclusion. Good for wrapping up.

Tornado Alert by Franklyn M. Branley
Part of the Let’s-Read-and-Find-Out Science series, perfect introduction for younger students including the science behind tornadoes and tornado safety, all from a favorite author!

Tornadoes! by Gail Gibbons
From another favorite author, this one goes into more historical detail, and covers how tornadoes form and the Fujita scale.

Tree in the Trail by Holling C. Holling
Beautifully illustrated title on our recommended reading list with a tornado element. Read our full review with suggested activities.

Kansas: In the Heart of Tornado Alley by Dr. Jay M. Price
Finally, for more mature readers interested in the Udall tornado and others like it in Kansas, this photo narrative by a Wichita State University professor and his students describes the effects of the destruction and the rebirth in the rebuilding with the intention to “show the varied ways in which the tornado has shaped the lives of Kansans.”

Owlie Skywarn Weather Book
Another activity book from FEMA, NOAA, and others.

Tornado!
Great lesson plan from the University of Colorado that explores the Fujita scale and tornado-proof buildings.

Understanding the Energy of Tornadoes
Infographic that can be printed and folded into notebook.

Tornado Activity in the United States
Map of tornado alley from the USDA.

Tornado: Shape Poem
Or create a tornado poem to wrap up (also at EnchantedLearning.com).

Ten 2022 reader-favorite activities from the archives: balancing a checkbook, viewing sunspots, charting the weather, and more!

Our Step-by-Step Guide has been frequently updated but the principles really haven’t changed. Get started!