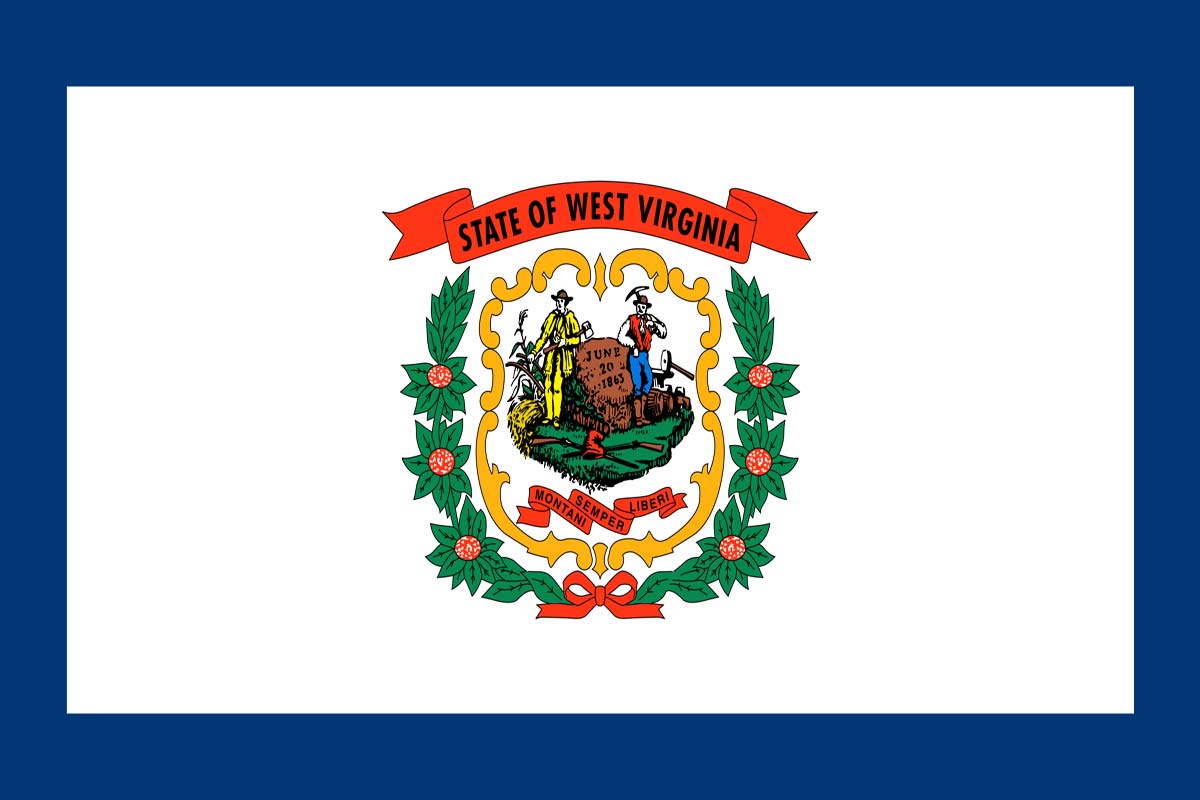 On March 26, 1863, West Virginia ratified a new state constitution providing for the gradual abolition of slavery, thus guaranteeing a place in the Union apart from Virginia.

From the earliest days of colonization, Virginia and West Virginia were inextricably linked. In 1584, Queen Elizabeth I of England granted Sir Walter Raleigh a charter to send out an expedition to the New World. The explorers landed on the coast, claimed the land for England, and named it “Virginia” after Elizabeth, the Virgin Queen. Later, in 1607, the first permanent settlement in Virginia was founded—Jamestown.

Early settlement in Virginia tended to stay near the coast at first, avoiding the Indian-haunted mountains to the west. But the colonists finally grew curious as to what lay in that direction. Once the push westward into the more remote parts of Virginia started, it was not readily stopped, whatever claims the natives might have had on the land. White men were eager for land and furs.

A treaty was made in 1722 which gave the Iroquois the right to all of the land west of the Blue Ridge Mountains, including present-day West Virginia, but that did not stop the settlers from crossing the boundary and building homes in the area. Beginning in 1727, pioneers of all descriptions, most notably the Scottish, the Irish, the Welsh, and the Germans crossed the Blue Ridge to settle. The Iroquois were indignant at this invasion into their rightful hunting grounds, which they shared with the Cherokee and Shawnee.

Trying to calm the situation, Governor William Gooch bought a portion of the Iroquois land in a treaty in 1744. Unfortunately, this agreement caused still more trouble. The wording was rather vague. Neither the colonists nor the Iroquois were quite sure if white settlement was allowed only to the foot of the Alleghenies or if the Indians had ceded all of their lands south of the Ohio River. Both parties tended to interpret the treaty favorably to themselves, and the inevitable result was conflict. Another treaty was signed in 1752, this time making it clear that the Iroquois were to give up their rights to the land south of the Ohio. The somewhat less troublesome Cherokee and Shawnee tribes were allowed to remain.

Peace still did not come to the western portions of the Virginia Colony, however, for the French had claims on the Ohio Valley, as well. The French and Indian War took place between 1754 and 1763, wreaking havoc among whites and natives alike. The war ended with British claims firmly established, and the Indians gradually began to turn over their lands to the whites.

Tobacco plantations fostered a somewhat aristocratic society in eastern Virginia, while a hardscrabble frontier existence quickly created a very different type of culture to the west. The colonies were still under British rule when plans were made to divide Virginia in two and create a fourteenth colony, Vandalia.

The thirteen colonies became the thirteen states in 1776, Virginia remaining intact in spite of petitions to Congress to create the state of Westsylvania from the proposed Vandalia. However, all was not quiet. The two cultures were frequently at odds, particularly when a new state constitution was written in 1829. This constitution based voting rights on property holdings, which in practice would mean that only slave owners on the eastern plantations would be able to vote. Not surprisingly, the western portion of the state voted against the constitution, but there were enough eastern votes to ratify the document.

On the issue of slavery, the divided state could not be reconciled. When the abolitionist Republican Party’s candidate, Abraham Lincoln, was elected president, the party of the abolitionists, Virginia voted to secede from the Union and join the Confederacy. This proved to be just the opportunity the western settlers were waiting for.

In May 1862, Senator Waitman T. Willey of Virginia called on Congress to admit West Virginia to the Union. At the same time, he proposed the Willey Amendment, which would require the prospective state constitution to be revised to provide for the gradual emancipation of slaves. The Senate passed the bill that July, making the Willey Amendment the condition for statehood. The House followed suit in December, and Lincoln signed the bill on December 31. Statehood became official on June 20, 1863, making West Virginia the 35th state, and one of two states admitted to the Union during the Civil War, Nevada being the other.

Disputes between Virginia and West Virginia continued for over a hundred years. The question of boundaries, in particular, caused the two states a great deal of angst. In 1871, the U.S. Supreme Court settled the matter of which counties formed the new state and which remained with the old, but the lines between the counties were still being examined as late as the 1990s. Distribution of debt was another bone of contention, Virginia demanding that West Virginia pay its share of the debt incurred before the Civil War began.

With the Civil War over and the Industrial Revolution spreading across the country, there was soon a great demand for the abundant natural resources that West Virginia could provide. Coal and timber created a foundation on which the state’s economy could be built, and railroads, factories, and cities followed. World War I sparked even faster growth.

However, the Great Depression took a heavy toll on West Virginia, and even the renewed production demands of WWII could only temporarily prevent economic disaster. Oil had become far more important as a fuel than coal, and many of West Virginia’s mines were shut down. Both the state’s economy and its population suffered. In the 1990s, however, three of the key industries of West Virginia began to expand—coal, timber, and tourism.

Today, West Virginia’s economy is diverse, yet it lags behind most of the nation. Personal income growth ranked 50th in 2013 at 1.5%. Thriving business centers contrast sharply with rural poverty.

Chemicals account for a tremendous portion of the state’s economy, as do biotechnology, advanced technology, and research and development. Tourists are attracted to ski resorts, historic sites, and natural scenery. The traditional mainstay of the West Virginia economy is also still a major factor: energy. West Virginia is home to the nation’s second largest coal reserve. However, the state’s energy resources are growing more varied. Natural gas and renewable energy are becoming increasingly important. Besides coal, West Virginia’s natural resources include stone, salt, gravel, sand, and clay. Other industries include aerospace, automotive, healthcare, education, metals, telecommunications, and forestry.

One of the most noticeable features of West Virginia’s geography is its unique shape. It has not just one but two panhandles, one pointing north, the other pointing east. Clockwise from the north, the state’s neighbors are Pennsylvania, Maryland, Virginia, Kentucky, and Ohio. The state capital is Charleston. The principle rivers are the Ohio and the Potomac.

West Virginia is known as the “Mountain State.” The eastern fifth of the state is part of the Ridge and Valley Region, featuring a series of parallel mountain ridges divided by fertile valleys. Most of the state, however, is part of the Allegheny Plateau. This area is also mountainous, but it blends into an uneven plateau crisscrossed by deep valleys. The plateau decreases in elevation as it approaches the Ohio River.

The climate of West Virginia is classified as continental, since it is not moderated by any large bodies of water. Summers tend to be hot and humid, while winters are fairly cold. The average January temperature is 32ºF, and the average July temperature is 72ºF. The record low temperature is -37ºF, recorded at Lewisburg on December 30, 1917. The first record high temperature of 112ºF was recorded at Moorefield on August 4, 1930, the second at Martinsburg on July 10, 1936.

The average annual precipitation statewide is 44 inches, the mountainous regions receiving more, the Eastern Panhandle receiving less. The rainfall is fairly well distributed across the year.

Trees are a major feature of the nature of West Virginia. Three quarters of the state are covered by hardwood forest. The original forests have long since been cut for wood, but the second growth is abundant. Tree species include ash, beech, hickory, red oak, white oak, tulip tree, black walnut, and maple, including the state tree, the sugar maple. Softwood trees, such as fir, pine, and spruce, are also present in areas of rougher terrain.

The fauna of West Virginia matches the forest ecosystem. Foxes, raccoons, and beavers call this state home, as does an endangered species of flying squirrel. A variety of eastern songbirds are also present, including the state bird, the northern cardinal.

Did You Know???
West Virginia facts.

Interactive Map Maker
Make and label your own map of West Virginia.

Civics Activity Book
Also from A Beka, but written for a higher level than the above title, this activity book guides state research “in a study of national, state, and local government with a brief overview of the Constitution and a variety of interesting activity sheets. In addition to government, students also study the history, geography, and other characteristics of their state and local areas.” We have enjoyed many of the activities in this book, which include writing letters to state officials, researching the state history, and other activities.

A Legislative Book of Activities
An informative download for students from the West Virginia Legislature.

A State of Convenience: The Creation of West Virginia
55-page download from the West Virginia Division of History and Culture for older students that explores the Virginia divide using primary sources.

U.S. States and Capitals Map
Color West Virginia and write in the capital on this printable at PrintableMaps.net.