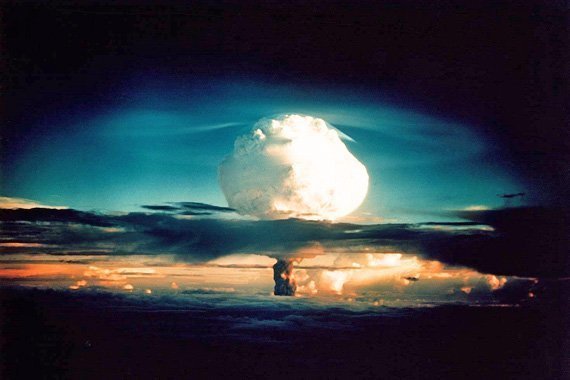 On November 1, 1952, the United States detonated the first hydrogen bomb. The bomb, codenamed Mike, was detonated at 7:15 AM on the island of Elugelab in the Marshall Island group, completely vaporizing the island and leaving behind a crater beneath sea level more than one mile wide and 164 feet deep. Within the first 90 seconds after the blast the fireball reached 57,000 feet high, ultimately reaching 120,000 feet. The yield of the explosion was equivalent to a staggering 10.4 megatons of TNT, containing as much force as all the bombs dropped on Germany and Japan in World War II and 450 times more powerful than the bomb dropped on Nagasaki.

Mike was part of a larger program codenamed Operation Ivy, established by President Harry S. Truman to counter efforts by the Soviet Union to become the first country to add thermonuclear weapons to their arsenal. Joint Task Force 132, assigned the responsibility for carrying out the “Mike” test, was comprised of members from all branches of service and many renowned scientists. Work began in March of 1952 to prepare the area for testing. One aircraft carrier and four destroyers as well as more than 80 aircraft were placed close to the test area to support the effort. A two-mile-long tunnel was dug connecting two islands and filled with helium balloons and sensors to monitor the progress of the fusion reaction.

Mike was the first test of a hydrogen bomb based on the Ulam-Teller concept. Designed by Richard Garwin, this staged device used a fission bomb primary (an atomic bomb similar to the those dropped on Hiroshima and Nagasaki in Japan during WWII) to explode a fusion bomb secondary made out of hydrogen — liquid deuterium to be exact, one of two stable isotopes of hydrogen occurring in nature. Although it was known that liquid deuterium could not be used in a deployable weapon, since deuterium requires a cryogenic cooling system to be maintained as a liquid, it could be used as a proof of concept and put the U.S. at least a year ahead of the Soviet Union in developing such a device.

Mike was physically huge with the entire assembly housed in a steel case 80 inches wide and 244 inches long, with walls 10 to 12 inches thick and weighing in at 82 tons. A six-story building was required to contain the bomb and all of the equipment needed for the experiment.

What is a Hydrogen Bomb?

Why the hydrogen bomb? Critical mass can be defined as the smallest amount of fissile material in a given area required to sustain a nuclear chain reaction. If the critical mass is exceeded, one nuclear reaction causes an average of more than one nuclear reactions releasing significant energy as the radioactive atoms come apart.

Due to the compressive forces required to smash the radioactive mass together sufficiently to create a fission explosion by exceeding the critical mass, scientists encountered a theoretical maximum explosive yield barrier. In other words, as larger and larger masses are considered (more mass equates to a larger explosion), it becomes increasingly difficult to achieve the forces required to compress them efficiently to explode all of the available radioactive material. Hence, in a bomb that relies on a fusion reaction and is self-reacting once it is triggered, theoretically there is no limit to the amount of explosive force that could be released in the detonation.

Physicist Herbert York noted after the Mike explosion, “It seemed we had learned how to brush even these limits aside [the limits of the atomic bomb] and to build bombs whose power was limitless.”

The Soviet Union as well as a handful of other countries were quickly developing similar technology. All of the pieces were in place for the Cold War’s center policy — that of Mutually Assured Destruction or MAD. Since there were, and still are, enough bombs positioned in strategic locations where it was guaranteed that not all could be destroyed by an aggressor nation, the attacked nation would still maintain enough destructive force to guarantee the complete elimination of the aggressor nation’s population. The only way therefore that the MAD policy would not hold was if the aggressor nation did not weigh the consequences of the elimination of its population or if a rouge element existed that could not be tied to a so-called nation.

Ivy Mike — First Hydrogen Bomb Test
From “Dr. Teller’s Very Large Bomb,” a PBS documentary. Includes description of how the bomb works.
(You may want to install an ad blocker before viewing.)

Race for the Superbomb: Timeline
From PBS.

Operation Ivy
30-minute video from the Federal Civil Defense Administration. Excellent resource!
(You may want to install an ad blocker before viewing.)

Nuclear Weapons Test Map
Showing the locations of nuclear tests around the world. From PBS.

Compare and Contrast Map
Interactive application at ReadWriteThink helpful for the suggestions above.

Persuasion Map
Interactive at ReadWriteThink that helps you develop a persuasive essay.

Is Control of Nuclear Weapons Necessary to Maintain Peace?
Extensive lesson plan from the Truman Library focusing on primary sources.

Fusion: The Hydrogen Bomb
Includes a portion of the PBS American Experience video “Race for the Superbomb.” The support materials include a background essay and discussion questions.

Numbers 7, 8, and 9 on Baldwin’s The Hundred Best Books for Children are classics by Charles Kingsley: The Heroes, The Water-Babies, and Madame How and Lady Why.

We have updated our ever-expanding Christmas Holiday Helps unit study and free resources!

Things to do in December updated for 2022: Free eBooks, free downloads, units, and Christmas finds!