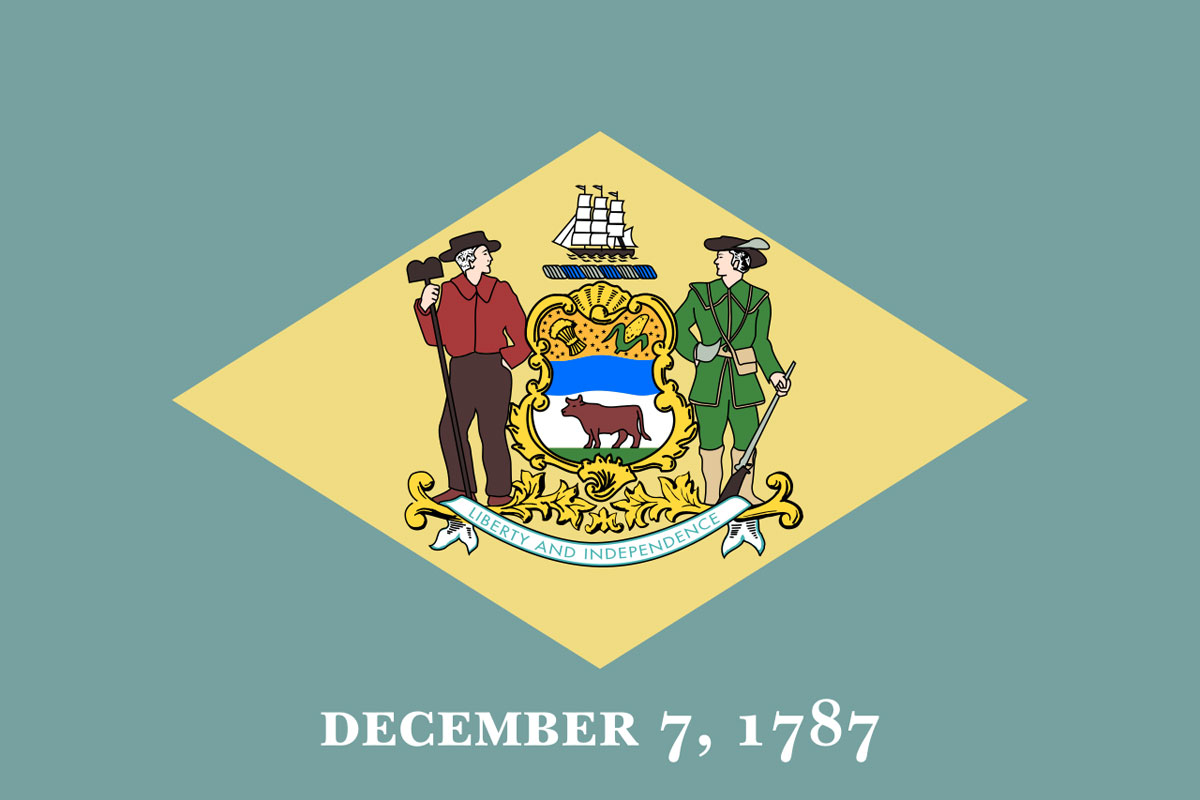 Before being settled, Delaware was the home to the Lenni Lenape, and the Nanticoke Indian tribes. The Dutch were the first Europeans to settle in Delaware in 1631; however, this settlement was destroyed by local Indians and the settlers killed. The Dutch again settled in 1651 establishing a fort at the site of present day New Castle. The Dutch were conquered by an English fleet under orders from the Duke of York, who later leased his holdings to William Penn so that the province of Pennsylvania could have access to the sea. That same year Penn established representative government for his holdings in Pennsylvania and Delaware.

By the summer of 1776 sides had been taken on the soon-to-come conflict between the British and self-rule. The Delaware Colonial Assembly declared its independence from both British and Pennsylvania rule on June 15, 1776 — days before the anticipated signing of the Declaration of Independence.

On August 27, 1776, the State Constitutional Convention met in New Castle abiding by legislation passed by the general assembly.  The ten elected members per county preceded to write the state constitution. Outlined in the new document was the creation of a second house of legislature and the creation of an executive privy counsel, chaired by a president. The privy counsel replaced the proprietary governor put in place by William Penn. This new structure was the compromise decided upon by the state constitutional convention to minimize potential misuse of executive authority at the highest level of state government.

On September 20, 1776, at hazard to life and limb of the representatives, the state constitution of Delaware was adopted and put into effect.

After hostilities ended with Britain, on December 7, 1787, Delaware became the first state to ratify the United States Constitution, earning the title “First State.”  The following words were used in the ratification, “We, the deputies of the people of the Delaware state, in Convention met, having taken in our serious consideration the Federal Constitution proposed and agreed upon by the deputies of the United States in a General Convention held at the city of Philadelphia, on the seventeenth day of September, in the year of our Lord one thousand seven hundred and eighty-seven, have approved, assented to, ratified, and confirmed, and by these presents do, in virtue of the power and authority to us given, for and in behalf of ourselves and our constituents, fully, freely, and entirely approve of, assent to, ratify, and confirm, the said Constitution.”

Delaware is located in the northeastern part of the Delmarva Peninsula on the east coast of the United States and is arranged into three counties – New Castle, Kent, and Sussex. The topography of the state is fairly level, as Delaware is primarily located on the plains between the Chesapeake Bay on the west, and the Delaware river, Delaware Bay and Atlantic Ocean on the east. The state rises only 450 feet above sea level at the highest point, and it is only 35 miles across at its widest point. Although the state is the second smallest state in the Union (after Rhode Island) it ranks sixth in population density.

Delaware is bordered by Pennsylvania, New Jersey, and Maryland. Its northern border with Pennsylvania was originally defined as a 12-mile circular arc section originating at the cupola on the courthouse in New Castle, making it the only one of its kind in the United States.

Delaware’s climate is fairly moderate since it is located on the Atlantic coastal plain, but it varies significantly over its small size as one travels inland away from the Atlantic Ocean to the north. Due to this climatic diversity, it also contains a diverse ecological environment with mixed oak forests in the northern part of the state and bald cypress trees in the south. The highest recorded temperature was 110°F in Millsboro on July 21, 1930, and the record low -17°F also in Millsboro on January 17, 1893.

The economy consists primarily of government (state, education, military), banking, chemical manufacturing, technology, and chicken farming. Dover Air Force Base located near Dover is one of the largest employers in the state and is one of the largest Air Force bases in the country. The chemical industry has employed a great number of people through the years with Wilmington being known as the “chemical capital.” Wilmington is still headquarters for the E.I. Du Pont de Nemours and Company. Due to business-friendly corporation laws, Delaware has incorporated over 63% of the Fortune 500 companies. Lastly, while having two Amtrak train stations, Delaware is the only state in the United States not to be serviced by a commercial air carrier.

Label the following on a map of Delaware (see Notebooking Pages below):

Constitution of Delaware: 1776
The state constitution adopted on this day in 1776.  Some may be particularly interested in Article 22.

Interactive Map Maker
Make and label your own map of Delaware.

Why is Delaware Called “The First State”?
Lesson plan from the State of Delaware that uses original source documents to find out.

The Delaware Flag
Lesson plan from the State of Delaware examining various symbols before creating your own.

The Merry Adventures of Robin Hood by Howard Pyle
Reading list favorite from the Delaware native.

State Birds and Flowers Coloring Book
Inexpensive option from Dover Publishing. Also check out their United States Coloring Book that has a state outline, symbols, and facts on one page.

U.S. States and Capitals Map
Color Delaware and write in the capital on this printable at PrintableMaps.net.