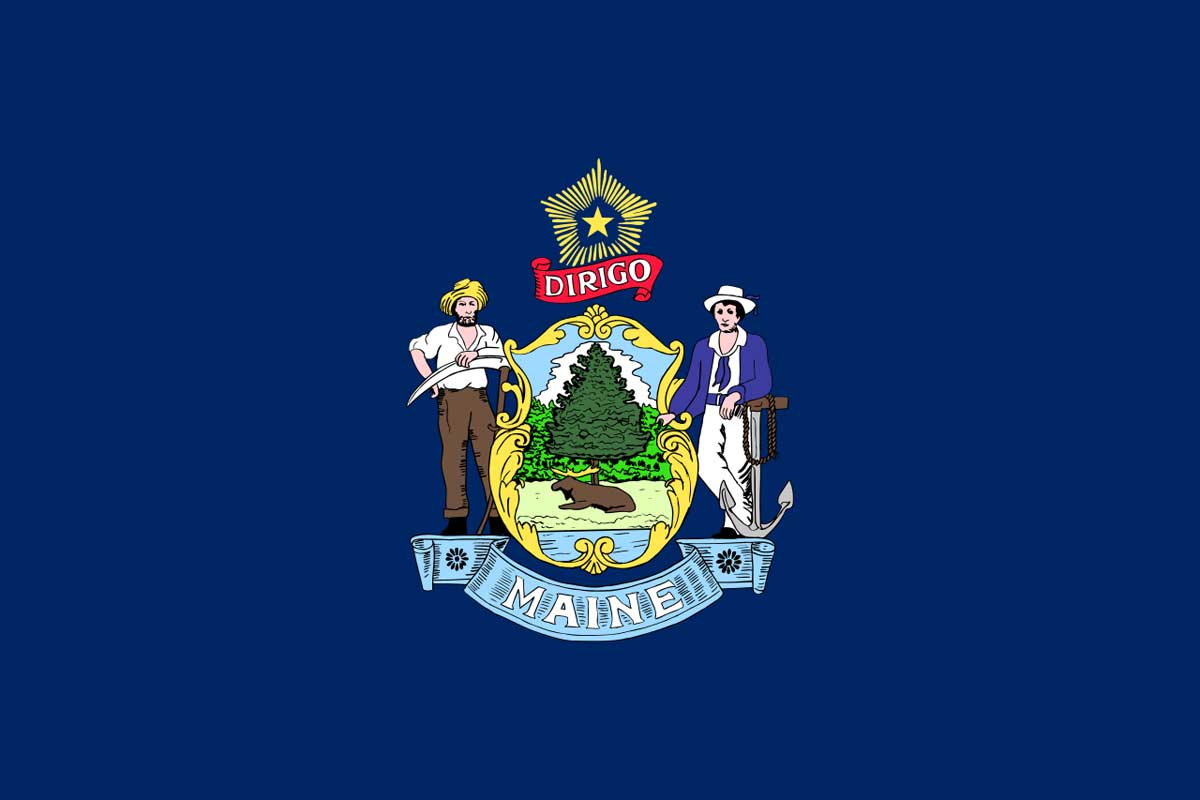 On March 15, 1820, Maine became the 23rd state in the Union as part of the Missouri compromise maintaining the status quo between free and slave states.

Maine’s long European history began with a settlement established on Saint Croix Island in 1604 by Frenchman Pierre Duqua, Sieur de Mons. The French named this area, which included what later became Maine, Acadia. At that time the land was inhabited by several Algonquian-speaking Indian tribes, including the Abenaki and the Maliseet.

The first English settlement occurred in 1607 at a place called Popham, a Plymouth Company settlement that lasted only 14 months before being abandoned. In 1609 and 1613, two Jesuit Missions were established at Penobscot Bay and on Mount Desert Island, respectively. The town of Castine was also established by Claude de La Tour in 1609.

On August 10, 1622 a land patent was given to Sir Ferdinando Gorges and Captain John Mason by the Plymouth Council for New England forming the province of Maine.  The province of Maine eventually became part of the Massachusetts Bay Colony in 1652. During the rest of the 1600’s and the early 1700’s the indigenous Indian tribes were driven out or defeated in Maine by the English. In the 1740s the French were defeated by the English in Acadia giving England total control over the area.

In 1820, Maine voted to secede from Massachusetts and become a state in the Union. Interestingly enough, the land mass that now forms the state of Maine was not established until 1842 by the Webster-Ashburton Treaty, which fixed the borders between British territory and the United States 22 years after statehood. Still unresolved to this day are Machias Seal Island, and North Rock off Maine’s eastern most point, which are claimed by both Canada and the United States.

Why “Maine”? A 2001 resolution adopted by the Maine state legislature establishing Franco-American Day, simply states that the name came from the former French province of Maine. The land patent of 1622 granted to Sir Ferdinando Gorges and Captain John Mason to form the Province of Maine was the first known record calling the land “Maine.” An October 7, 1883, NY Times article attributes the name to the state’s description in the original charter: “the Mayne land of New England.” Other derivations of the name Maine can be found referenced by English sailors, none of which point to a French provincial origin.

Maine is bordered by the Atlantic Ocean to the south and east, Canada to the north and northeast, and New Hampshire to the west.  Maine is the only state of the contiguous 48 to be bordered by only one neighboring state. It is the northernmost and largest of the New England states. It is also the easternmost state in the United States.

Known as the Pine Tree State, 90% of Maine is forested by these trees. Maine has 230 miles of rocky coastline. This coastline is the home of many small fishing villages, jagged bays, islands, and lighthouses. The coastline is referred to by geologists as a “drowned coast” which forms the interesting topography. Maine has also seen heavy glacial activity during the past resulting in Somes Sound, the only fjord on the east coast reaching 175 ft. in depth, and Bubble Rock, a large glacial granite-type erratic moved some 30 miles from its original location. New England’s only national park, Acadia National Park resides in Maine.

Maine has a humid continental climate. Average January temperatures vary from 32°F in the south to 0°F in the northern part of the state. Daytime highs in July average 75-80°F. The highest observed temperature was 105°F in July 1911 and the coldest, -50°F, in January 2009, the opposite of what one would expect.

Label the following on a map of Maine (see Notebooking Pages below):

How Did Maine Get Its Name?
From Maine.gov.

The Port of Portland Maine
The significance of the busiest port.

Lighthouses of Maine
Information and pictures of the more prominent.

Maine Recipes
Cook up something the Maine way!

Interactive Map Maker
Make and label your own map of Maine.

Keepers of the Light
A unit study on lighthouses by Jodie Wolfe, Home School Enrichment Magazine.

“How Maine and New Hampshire Were Founded”
A chapter from This Country of Ours by H.E. Marshall.

Keep the Lights Burning, Abbie by Peter and Connie Roop
Abbie is left in charge of keeping the lighthouse oil lamps lit when a storm hits.  You’ll appreciate her bravery.  Based on a true story.

Blueberries for Sal by Robert McCloskey
Sal and her mother go blueberry picking and inadvertently get separated.  Sal isn’t the only one who enjoys the blueberries!  Caldecott Honor winner.  Read our entire review with activities.

Time of Wonder by Robert McCloskeyAnother wonderful story from Robert McCloskey about a summer spent on the coast of Maine.  Caldecott Medal winner.  Read our entire review with activities.

One Morning in Maine by Robert McCloskey
Also by McCloskey and also a Caldecott Honor winner.  Oceans, clams, ice cream…and a lost tooth.

State Birds and Flowers Coloring Book
Inexpensive option from Dover Publishing. Also check out their United States Coloring Book that has a state outline, symbols, and facts on one page.

U.S. States and Capitals Map
Color Maine and write in the capital on this printable at PrintableMaps.net.