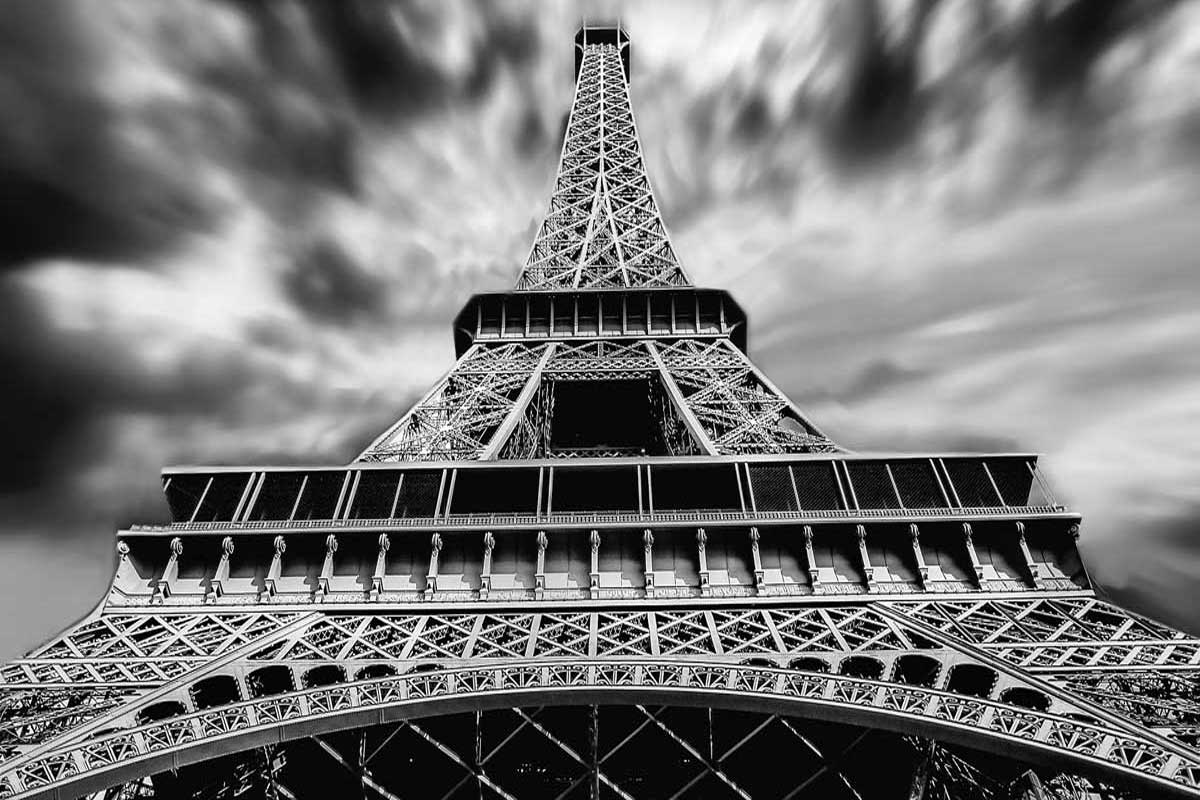 Built in 1889 for an exhibition to celebrate the 100th anniversary of the French Revolution, the Eiffel Tower has become almost synonymous with Paris, if not the entirety of France.

How the Eiffel Tower Was Made

The Eiffel Tower is a masterpiece of design.  All of the needed metal pieces were fabricated in a different place according to the plans made by the builder whose name the tower bears, Alexandre Gustave Eiffel.

The pieces were precision-made, and the accuracy of each part was controlled to a small part of an inch. The parts needed to build the structure were hoisted up into place by cranes mounted in the legs of the tower, and then were riveted in place. In all, 2.5 million rivets were used.

The Eiffel Tower is an enormous 986-foot-tall structure, consisting of 7000 tons of iron. It was the tallest tower in the world until the Chrysler Building surpassed it in height in 1930. Every seven years, fifty-five to sixty-six tons of paint are needed to keep this massive metal structure from rusting.

Despite being so tall, the massive Eiffel Tower is safe from wind storms. Due to the ingenuity of design, not only does the cross bracing of the metal structure help by making it much stronger, but the open lattice-style construction allows the wind to simply flow through the structure. The total estimated sway initiated by hurricane-force winds is but 8.8 inches.

The History of the Eiffel Tower

The Eiffel Tower was dedicated in a ceremony on March 31, 1889.  Alexandre Gustave Eiffel originally had a permit for the tower to stand for twenty years. However, as radio was invented around this time, the tower became a radio tower in 1901. In 1944, Adolf Hitler ordered the tower to be destroyed. However, for reasons apparently lost in the pages of history, the general who governed the city of Paris at the time disobeyed. It has been suggested that Hitler decided to keep the tower intact as a radio tower.

The Eiffel Tower still stands in Paris receiving 200,000,000 visitors over the years, and is now almost the very emblem of Paris.

Eiffel Tower Deconstructed
(You may want to install an ad blocker before viewing.
Fun facts and interesting information in this History Channel video.

Origins and Construction of the Eiffel Tower
Plans, construction with photos, and original blueprints.

How Science Saved the Eiffel Tower
Interesting article at The Society for Science that explains how the tower was used for scientific purposes.

Eiffel Tower, Paris, France
Google map view from above.  The tools can be used to tour the tower.

360 Panorama
A 360-degree tour of Paris from the Eiffel Tower.

Biography of Gustave Eiffel
A look into a few of his other projects, including the structure of the Statue of Liberty.

Eiffel Tower 120th Birthday Video
Video of the 2009 birthday celebration. Incredible! (You may want to install an ad blocker before viewing.)

The Birth of the Eiffel Tower
A Google photo presentation.

Build Your Own Tower
Build your own tower with Legos, Plankos, K-Nex, building blocks or Popsicle sticks and glue, straws and tape.

Eiffel Tower – LEGO
Completed tower by a professional LEGO sculptor and how it was constructed with blue LEGOs.

Eiffel Tower Model
Paper model to cut out and assemble at Paper Toys.

Eiffel Tower Paper Craft
Build your own using this template from Canon.

The Eiffel Tower ~ Free eBook
Illustrated look at the project.

Follow Gus
36-page student guide from the official Eiffel Tower site for “discovering the secrets of the Eiffel Tower.”  Corresponding lesson plans and activity downloads are available in a separate Teacher’s Kit.

The Higher You Climb the More You Pay
Lesson plan at EconEdLink.org uses the Eiffel Tower to explore why things cost as much as they do.

Critical Load
Lesson plan from the IEEE that measures the weight at which a structure will fall.

France: A Unit Study
More about the home of the tower in our free unit.

The Eiffel Tower Notebooking Pages
Simple pages for copywork, narrations, or wrapping up.

Students will have a much easier time remembering how to spell words as they are taught in context. The Aldine Speller takes this approach. Free

The purpose of The Book-Lover was to offer a guide to reading — including The Hundred Best Books for Children.

The Land of Fair Play a free civics text for students in the middle grades that compares the running of government to the lessons we learn “on the playground.”